A look at albums we have written about in 2013 – here’s Mícheál Ó Súilleabháin and his 2013 release ‘Cry of the Mountain‘  taken from Irish Music Magazine. 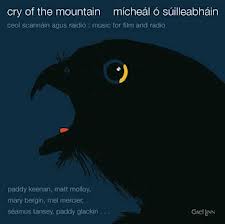 If you take a look at Mícheál Ó Súilleabháin’s website the title tabs perfectly sum up the attributes of the man himself; namely composer, performer, educator, writer, speaker, broadcaster and recording artist. The founding Director of the Irish World Academy of Music and Dance, he has documented a musical path that has explored the realms of Irish, world and jazz through countless recordings.
This particular release, Cry of the Mountain, is a showcase of music recorded between 1974 and 1978 for film and radio. The extended structure of musical composition is segmented on the tracks by the media programme it was broadcast on. The RTÉ Radio documentary The Green Linnet features the pipes of Paddy Keenan, the flute of Matt Molloy, whistles from Mary Bergin and Michael Crehan, the fiddle of Paddy Glackin, percussion from Mel and Paul Mercier and Mícheál himself on the harpsichord. The line–up speaks for itself and the variation and earthy exploration into the rhythm and structure incorporates a timeless vigour that belies its age. The sixteen–minute collaboration of instrumental on Seán Ó Duibhir an Ghleanna is outstanding in its intelligent formation and creativity of arrangement. The differentiation in the use of instruments to create overlay without detracting from the core melody creates a compelling piece of work. The arrangement on Cry of The Mountain extends the musical exploration as it attributes world flavours to a rhythmic tornado of sound that is accentuated by the distinctive voice of Nóirín Ní Riain.
Cry of the Mountain deserves to be heard again over thirty years after it was composed and recorded. It is a lesson in the exploration of the genre and as relevant now as it was then.
Eileen McCabe